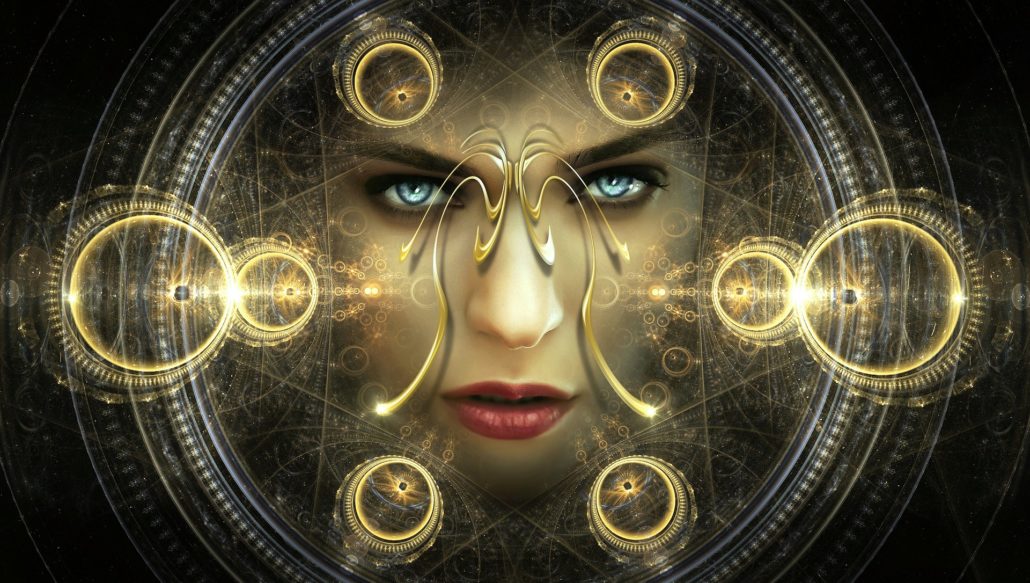 THE TREE OF LIFE

To understand the placement of the Minor Arcana Cards, all we have to do is look at the cards’ placement on the Tree of Life. The numbers in the suits, correspond directly to the numbers of the Sephirot – with Aces belonging to Keter and the 10s ending in Malkut. Before we get to the small cards, however, we need to examine the Court Cards.

In Part I of this series, we discussed the Four Worlds (see Figure 7) of the Tree of Life and its relation to the Tetragrammaton) יהוה. Each World is associated with an Element.

To bring it home to the Court Cards, we will also use the analogy of a Family Unit: Mother-Father-Son-Daughter. Thus the Sephira of Chokmah (male, positive) joins its opposite, Binah (female, negative) to produce a Son (Tipheret) and Daughter (Malkut) – or King-Queen-Prince-Princess.  (Please note that many decks use Knights in place of Prince and Page instead of Princess.)

When we look at the journey in reverse, to follow “As Above So Below” principle (as discussed in Part I of the series), we would start with the Princess, who resides on our earthly plane of Malkut. How appropriate (as we learned in LEARN TAROT IN A DAY), that in Tarot Readings the Princess (Page) is the very beginning stage of any development. And thus, as the Princess develops, she climbs up the Tree of Life (through a number of Paths, as discussed in Part II of this series). There she meets her Prince and, as opposites, they join together in their climb up the Tree where they become Queen & King.  As you probably predicted having read through the previous essays, once they become Queen & King, they will have a son and a daughter, and so the cycle continues perpetually.

To come back to the Tetragrammaton, Each of the Royal Family is assigned one of its four letters, which, in turn, corresponds to an element.  Thus, Kings are Yod – Fire (activating, positive).  Queens are Heh – Water (receptive, negative, formative), Princes are Vav – Air (activating, positive) and Princesses are Heh Final (Earth, receptive, negative, formative).  Opposites, anyone?

And thus, when we discuss the court cards, it is important to remember the origin (Sephirah) element of the Court Cart and the conditional element (Suit).  For example: as all Queens come out of the element of Water, the Queen of Cups would be Water in Water.  Therefore, all the best qualities of the element would shine in the Queen of Cups. After all, she is in her ‘element’ on the throne of Water.  Now, let’s examine the Queen of Swords.  She is Water in Air.  On the one hand, the qualities of water (sensitivity, feelings) will soften the qualities of pure Air – cold intellect. On the other hand, this Queen, who understands that she needs to be direct and rational, may be too abrupt and direct, as she deliberately suppresses her feelings in her need to put intellect and rational above all.  To be sure, the feelings are still there – but the constant need to subdue them may eventually have this Queen explode!

It is easy to see how the Court Cards, unlike the Trumps which outline karmic forces, represent decisions: whether they are ours or someone else’s. Nonetheless, in Court Cards in readings suggest situations and circumstances that are either controlled or influenced by individuals.

And so, we’re off to the small cards.  To begin with, the Aces are given a special treatment.  They sit directly above all Sephirot in Keter – Pure Spirit.  And just like out of Spirit everything else is created, the Aces embody the full potential of any given suit.  (Whether or not this potential will be realized is another story).

Just like with the Court Cards, we need to place the numbered cards into the Four Worlds.  (and then the four trees into those worlds- See Figure 8). Thus 2s and 3s belong to Atziluth – the world of Fire. 4s, 5s and 6s belong to Briah – the world of Water. 7s 8s and 9s belong to Yetzirah – the world of Air. 10s are in the own earthly world of Assiah. Therefore, when we discuss a particular Minor Arcana numbered card, we need to consider the influence of the qualities of the Sephirah associated with the card, combined with the element of that World.  For example, Seven of Swords is Netzach in Yetzira.  Netzhach is Victory. Yetzirah, like the suit of Swords is Air.  Therefore, we have an action that will be done at any cost, without any consideration for morals, ethics or feelings. Furthermore, the further we are from the Source (Keter), the less we are influenced by Spirit (Love).  And, voila The Seven of Swords often means deceit, treachery, or betrayal.  Too look at another example, let’s examine the Four of Pentacles.  It is Chesed in Assiah, the material world. Chesed (Mercy). The magnanimous Chesed, which hails from the World of Water, penetrates Assiah (earth).  It is like a rainfall assuring a good crop.  And thus, with the nourishment of water in soil, we have an assurance that our ‘harvest’ is safe.

In conclusion, I just want to make clear that Kabbalah itself, while it may cover many bases, will not make your Tarot Reading complete.  But neither will memorizing someone else’s definitions (which vary from source to source) of the cards.  Nor will Astrology.  To understand the 360 degree picture of the world of Tarot Divination, you must have an understanding of all three methods and their relationship to each other. Think about learning a foreign language.  In order to become fluent in it, you will need to master speaking, understanding and reading/writing. Can you do with just one or two? Very likely. You can probably get by with reading and speaking – but will you feel accomplished if you don’t understand what’s said to you? Or can you feel fluent if you can understand the language but not read the street signs or a restaurant menu?

And so it is with The Tarot. To become ‘fluent’ in the language of the Tarot, you must be able to tie in all three philosophies.  It is only when you start considering Astrology & The Kabbalah in your readings, will you take them to the next level: the level of insight and understanding.