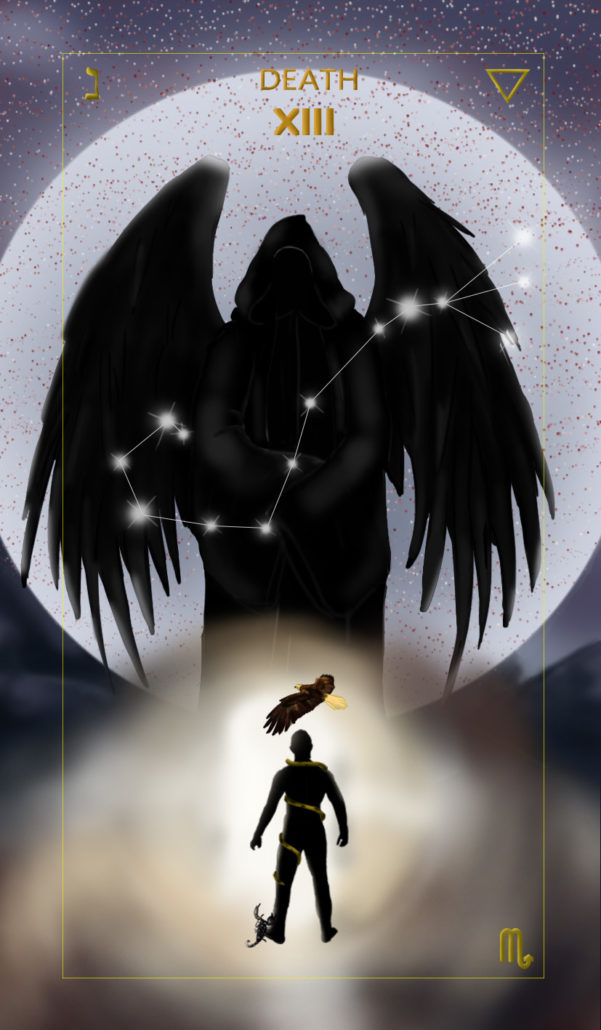 DEATH IS SCARY – OR NOT?

Death scares most people. Likewise, the DEATH Trump sends shivers through the spine of many card readers and their clients. After all, Death is the final frontier, isn’t it? It’s that the ultimate unknown.  Thus it is only natural that we should be weary of the Tarot Death card, right?

Nope! Not me! As a matter of fact, DEATH is my favorite card in the deck. I will explain.

Have you ever wondered why there is no ‘Birth’ card in the tarot deck or no ‘Birth’ path on the Tree of Life? The reason it does not exist is because Death and Birth are one and the same.  The second we die, we are transformed into pure spirit.  The moment of our birth is when we return into the material world.  And so it goes – over and over again. Think about the Ouroboros: the serpent with its tail in its mouth.  You don’t know where it begins or ends.  If you spin it, you wil interchangeably see the moutn and the tail – over and over and over.  That’s the whole point of the Ouroboros: cyclical nature of thing.  It tells us that every end is a beginning and every beginning is and end of something else.

And so it is in the DEATH card.  Simply put, Death brings on a change – a new beginning – a new birth.  But there is a lot more to the card than just that simple explanation.

The Hebrew letter of the DEATH card is Nun, which means fish.  How tellingly then that Carl Jung described the alchemical meaning of fish as a ‘Cinedian’ fish.  Cinedian comes from a Greek word ‘kineo’, which means to set in motion.  Thus a death sets in motion a beginning of a new cycle; rebirth.

On the Tree of Life, the Path of Death leads us from Netzach (Victory) to Tipheret (Beauty). It is a Path of personal evolution; the Path on which the energy of the ego (Personality) goes through a physical death to reconceptualize in initiation of the Higher Self.  Here we have a change of perception about nature of reality and the understanding of what constitutes Death.  It is our will to live, our very desire to continue the function of our Personality in the corporeal state that is abolished on the Path of DEATH. And yes, to achieve that, we sacrifice our physical being.  It is a scary endeavor. In the words of Carl Jung “by descending into the unconscious, the conscious mind puts itself in a perilous condition, for it is apparently extinguishing itself.”

The Zodiac sign that rules DEATH is Scorpio.  In this card, Scorpio is represented by its three symbols: Scorpion, Serpent and Eagle. It is a representation of the transition on the Path of Death from a dangerous, poisonous, primitive crowling creature, into the serpent that intertwines its way up (into the Light) to become an Eagle – a free creature that soars high above us.

Also, in this card, we see a soul at the moment of crossing over – as it presents itself to Azrael (the angel of Death) – the same hermaphrodite angel that will appear in the Temperance and Devil Cards. It is the FOOL himself that is presented here – but at this stage, he is a FOOL no more.  He is standing in front of a light tunnel awaiting his life review.

In simplest of terms, the Death trump represents changes.  But, unlike the TOWER card, which promises an unwanted and immediate destruction, the changes of DEATH are welcomed and coveted.

In a Tarot Reading, DEATH can represent one or more of the following: