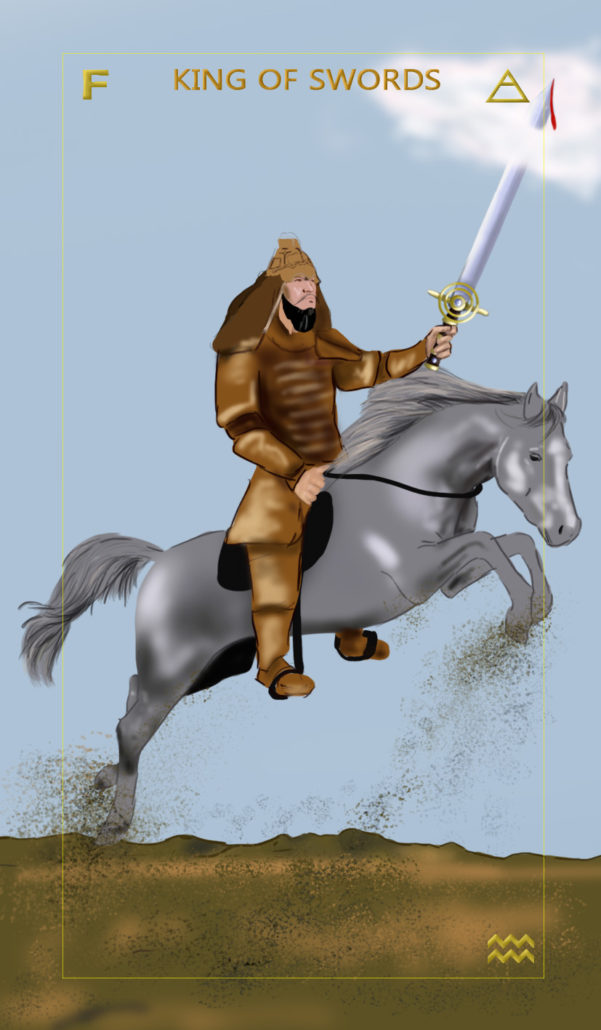 LORD OF THE WINDS AND BREEZES

The King of Swords represents Fire in Air. He is the storm of the exploding mind. This King is sharp-minded, analytical, clever, dexterous and courageous. He is always ready for and fond of discourse and verbal warfare. His passion for intellectual mind games can make him an excellent warrior in battles of logic, enjoying both nuanced subtleties and bizarre contradictions.

At his best, the King of Swords stands for intelligent judgement and mental realizations. He is a both, a masterful charlatan and a keen observer. Because he is lacking the depths of the water and the stability of earth, he can, unfortunately become a victim of his own ideas, into which he charges wholeheartedly, without reflection.

As the element of Air refers to the conscious (logical) mind, The King of Swords has the attributes of subtlety and shrewdness.

At his worst, the King of Swords tends to put logic and mind ahead of all other values, turning into a cold analytic judge, without empathy or warmth.  When ill-dignified, this King can degenerate into a deceitful,

He can even degenerate into to a deceitful and derisive mental tyrant.

The King of Swords is Genghis Khan. After uniting the nomadic tribes of the Mongolian plateau, he conquered huge chunks of central Asia and China. Many people were slaughtered in the course of Genghis Khan’s invasions, but he also granted religious freedom to his subjects, abolished torture, encouraged trade and created the first international postal system.

On the card, we see this King is rising up from the steppes of Mongolia.  The king is holding up the sword pointing forward.  His sword is cutting through a cloud, which is representative of his conscious mind cutting through confusion and uncertainty.  A drop of blood is dripping from the sword, showing that this King’s power can be aggressive,  even if it does result in a favorable outcome.