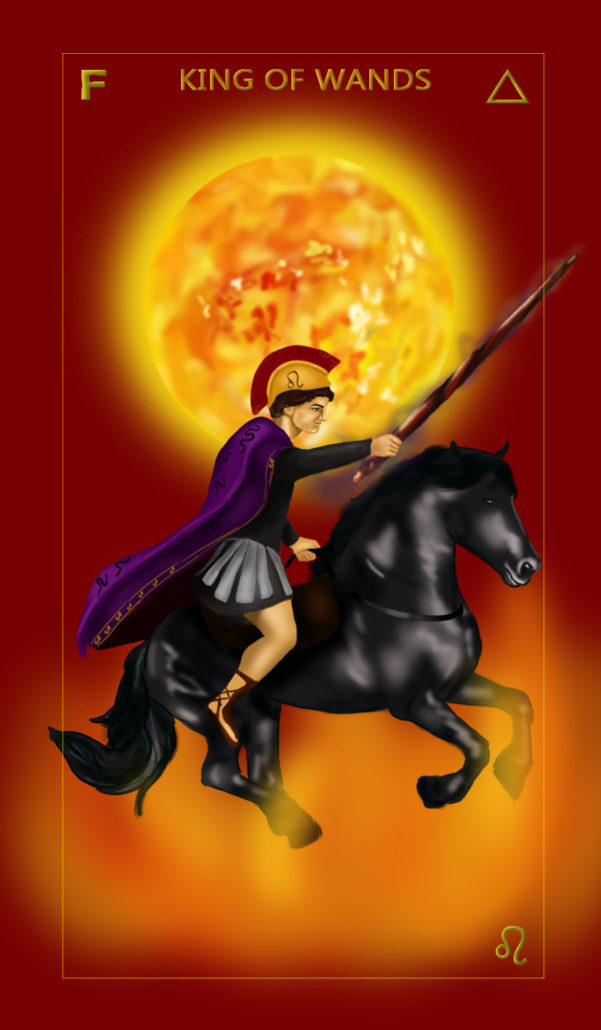 LORD OF THE FLAME AND OF THE LIGHTNING

Every king is a representative of the Sephirah CHOKMAH: Wisdom. Each King is the very dynamic outpouring of energy.  King of Wands is Fire of Fire (Element of Fire in the world of Atzilut (fire).

As fire in fire, the King of wands is the very basic and pure manifestation of his element.  He is burning, flaming, enthusiastic and thrilling.  He is a born leader; full of ideas and idealism.  He is proud and commanding.  At his best, this king is noble, honest, conscientious and intelligent. In some ways, you can say he has a right to boast.  For Atzilut is the highest of the worlds and Fire is the highest of the elements.  Therefore, The King of Wands stands for highest inspirations, spiritual realization and purest creativity.

One might say that at times, all this fire can be less than favorable.  Being fire in fire, the King of Wands lacks the depths of waters, the stability of the earth and the analyzing logic of air. There are times when his strengths may degenerate to sheer tyranny, and his convictions (right as they may be) may stiffen to dogmatism.  This King might be cruel, bigoted and brutal when he is at his worst.

Furthermore, the fires within fire lack the sources of reserved potentials, so once the explosion is over, there is nothing more left for the King to provide.

The king portrayed here is Julius Caesar.  He is the one that started it all. It was he, that started the expansion of the Roman Empire, which eventually encompassed half the world.  Julius Caesar was the very incarnation of Chokmah bursting forth at the beginning of the Kabbalistic Creation.

The king is on a black horse.  Both the king and the horse are flying up from the flames trying to encompass them.  The whole scene is very dynamic. once again, representing the forward energy of Chokmah.  The king is leaning forward.  In his hand, he has the wand, also pointing forward.  On his crest is the astrological sign of Leo (representing the Zodiac) Scorching hot sun is in the background.  On his robe are serpents (referring to Chokmah).