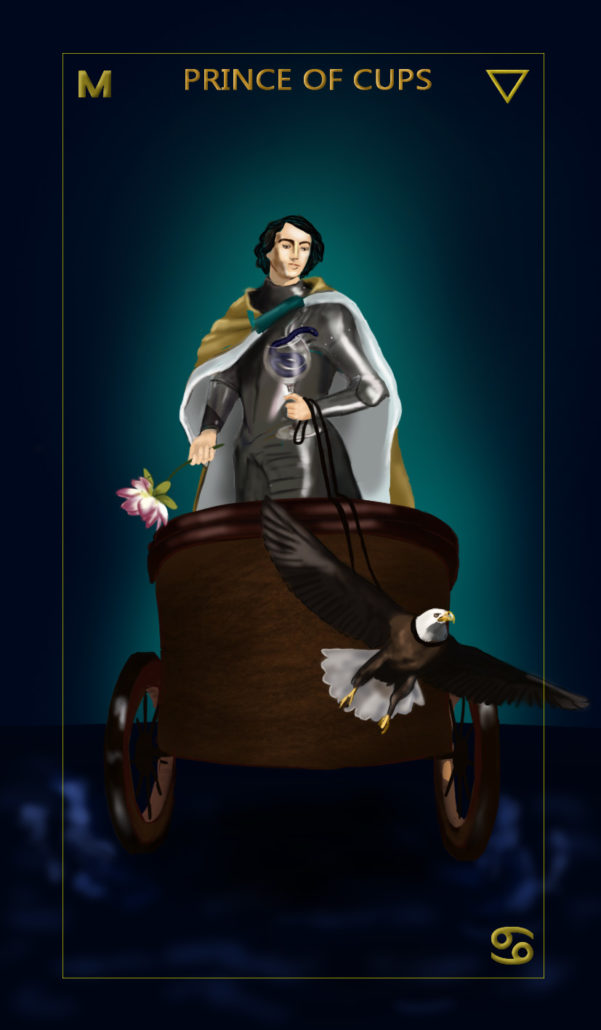 PRINCE OF THE CHARIOT OF THE WATERS

The Prince of Cups represents the Air above the waters, as the son of the King and the Queen – Fire and Water – he combines both the fiery flames and the watery depths of his parents, bringing them up in the heights of the Air, storming towards Yetzirah.

The Prince of Cups has all the emotional depths of twater, but also the intellectual values of Air. He is clever and open-minded. His emotional soul can make him a sensitive artist or philosopher. Due to the heritage of Briah, this Prince appears introverted and closed-in, Indeed, he tends to keep his secrets to himself. Like both his parents, he seems to be easy susceptible, but the sharp-minded air makes him make up his own mind.

On the shadowy side, the Prince of Cups can be reckless and selfish, always striving to improve his own goals and studies. He strategically sacrifices relationships in order to perfect his passions.  He can also be quite shifty in dealing with others.

The Prince of Cups is Peter the Great of Russia.  Crowned at the age of 10, Peter grew up to bring the Tsardom into a much larger empire that became a major European power.  He led a cultural revolution that replaced some of the traditionalist and medieval social and political systems with ones that were modern, scientific, Westernized and based on the Enlightenment.  Peter’s reforms made a lasting impact on Russia.

The prince is in a chariot in the waves – pulled by an eagle. The Eagle is the water symbol among the four Cherubic emblems.  In his right hand The Prince is holding a lotus upside down.  The inverted lotus implies that he holds his emotions and intuition as less important than his intellect.

In his left hand, he holds the reigns of the chariot plus a cup from which emerges a serpent (symbol of Chokmah, the Divine Wisdom.). The Serpent is also a symbol of planet Mercury and the intellect.  The prince is looking at the cup with the serpent, giving in his favor over the lotus blossom.