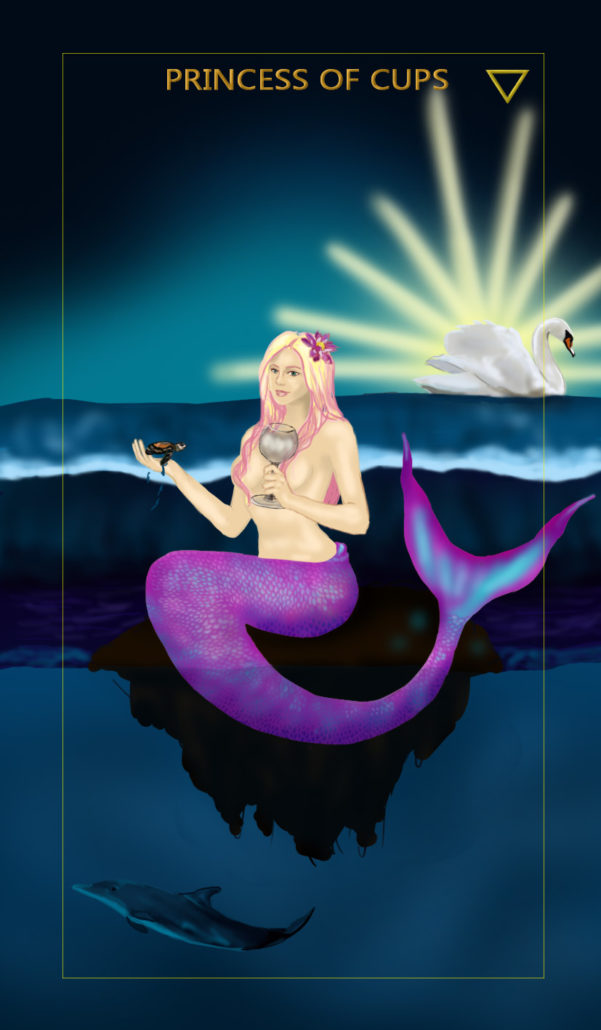 PRINCESS OF THE WATERS AND LOTUS

The Princess of Cups represents the earth in the waters of Briah.  She is an island floating in the groundless seas. She is far from her father’s flames and her mother’s depth. This Princess, therefore, lacks the inquisitive spirit of her brother. She is all about content warmth, kindness and love; surrounded by her island of romance and joy.

It is only natural that to an outsider, she may appear childish and self-absorbed. Yet she is a lot more than that. As earth of water, the Princess of Cups can literally ground  dreamy and romantic ideas into manifestation, and provide a fixed and productive habitat, where the water-nourished life of ideas can flourish.

ON THE OTHER HAND

On the dark side, the island of the Princess of Cups can be a mere sand-castle; drowning in the seas of irrationality and daydreaming. The Princess of Cups, unwilling to leave her realm outside the ‘common’ world, may sink with it and at its worst might seduce others to follow her.

The Princess of Cups is a Siren coming out of the waves. Sirens were nymphs, who drew sailors to their death with their enchanting songs.

On top of the waves is a Swan with ten rays emanating from it. The number ten, of course, represents Malkut, the Sephirah in which all Princesses live. The Swan is related to Orpheus, who chose to be reborn in that form and thus to the lyre and all musical forms.  It is attributed to Venus, which represents this Princess’ expression of love.

Under the water is a dolphin: the royal fish symbolizing the power of creation through the feminine creative principle.  The dolphin is attributed to Pisces = sensitivity, intuition (linked to the Queen of Cups, this Princess’  mother).

In her hair the Princess of Cups wears a lotus flower, showing that she is emotionally open to receiving and giving love.

In one hand she holds a cup. In another is a turtle (a symbol of wisdom, because it withdraws into its own shell).  In Hindu Philosophy, the turtle supports the elephant who has the Universe on his back.  It is also attributed to Cancer, which is a conduit for the sensitivity and gentleness of the Princess of Cups.