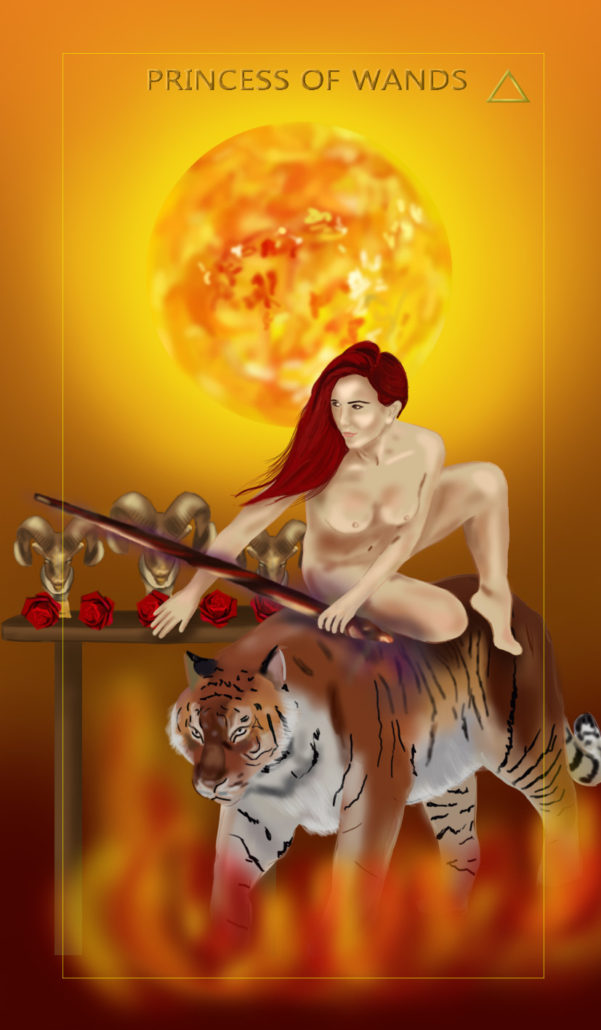 PRINCESS OF THE SHINING FLAME

The Princess of Wands represents the Earth in the element of Fire. This Princess is far from the Queen’s depth and the Prince’s Air.  She’s the Fire’s daughter:  with all the flaming energy of the King, unaffected by deeper emotions.

The only heritage from her mother is the good memory for insults and the thirst for revenge.

Yet, while she is dancing in the flames, the Princess of Wands has her own beauty, as well as her insatiable hunger for life and her endless, powerful energy. Her passion is hot, explosive and fast, burning down the object of desire and forgetting about it as soon as a new one comes in sight. Almost like Bizet’s Carmen, she’s irresistible in her seductive carelessness, in all her lust and anima.

The Princess of Wands is the the first created female: Lilith. Lilith was the first wife of Adam, created at the same time (as opposed to Eve, created later) as him.  Lilith left Adam after she refused to become subservient to him and then would not return to the Garden of Eden after she had coupled with the archangel Samael.

The Princess of Wands is nude for a reason: her nudity shows that she is not afraid to fully express herself.  The earth cannot hold her as she gives herself up to the flame so she is a very fiery character which can lack grounding.

The Princesses represent the Hé Final or daughter of the union of Yodh (Chokmah) and Hé Primal (Binah). This separation from the ONE is analogous to the ‘original sin’ as spoken about in the Bible which means separation from your spiritual nature. They are associated with the element of EARTH and the physical body. She is associated with the NEPHESH or animal soul and desires and whims of the body.

In one hand, the Princess of Wands holds a wand, which represents her energy, vitality and enthusiasm. Her other hand is on top of the alter of the Ram’s heads.

On top of the tiger and another upon an alter made up of three Ram’s heads.  These represent the ‘family members’ who came before her: King, Queen & Prince. The alter itself represents the gold of the sun.  Placed on the alter are five red roses.  These belong to the five senses fueled by the fire.