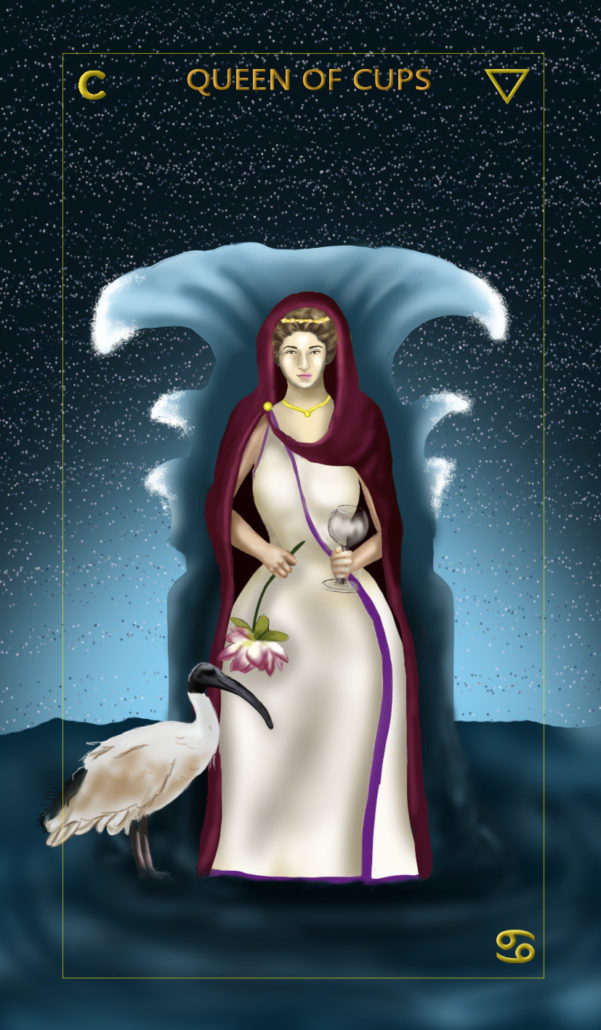 QUEEN OF THE THRONES OF THE WATERS

The Queen of Cups is the element of Water in the world of Water. She is, therefore, the purest manifestation of the soul of the waters. Thus, she represents pure emotion, passion, feeling – none of which is influenced by judgement or analysis. This Queen is loving and affectionate; a warm-hearted mother and a tender friend, looking into the depths of your heart.

On the darker side, the Queen of Cups lacks the stability of Earth, the will of Air or the drive of Fire.  Water in water is passivity itself.  It has no powers of its own, but rather serves to transform other powers that come through it.

This Queen  is susceptible to all kinds of influences.  As a result, her instability might let her appear unreliable and inconstant.

At its worst, the precious qualities of imagination and flowing fantasy might turn out to weakness and thoughtlessness, turning any which way the wind blows; getting lost in a dream-world of surreal fantasies.

The Queen of Cups can not be seen and understood intellectually, one has to feel her. Furthermore, she has the ability to lose a sense of self and merge with the Universal Subconscious. Thus her individual Ego does not hold much importance.

The Queen of Cups is Berenice.  Berenice was a queen in Judea, during the 1stcentury CE.  She was the daughter of King Herod Agrippa I and a sister of King Herod Agrippa II.  Berenice fell in love with the then Roman General, Titus, during the Roman- Jewish Wars.  He was 14 years her junior.  What followed was a tumultuous love affair which lasted a decade and ended with him discarding her to appease the Romans and become emperor.

The Queen of Cups is seated on a throne made of waves.  These waves blend with the  waves of the sea from which it emerges. The water is calm.  That’s because The Queen of Cups  is calm and self-assured. She does not need to assert herself aggressively.

The Ibis is associated with Thoth-Hermes, who is, in one aspect the Moon God.  In mythology, the bird eats the eggs of the snake (a reference to Chokmah) and the corpses of the dead.  Thus in the Water aspect of Binah is the reference to the Great Sea from which life flows out, but also flows inward in death.  The lotus, which has been equated with the rose, is sacred to Isis, the Great Mother. It is through the intermediary of the lotus, rather than a direct touch of the hand, that the Great Mother causes the ibis to do its work.