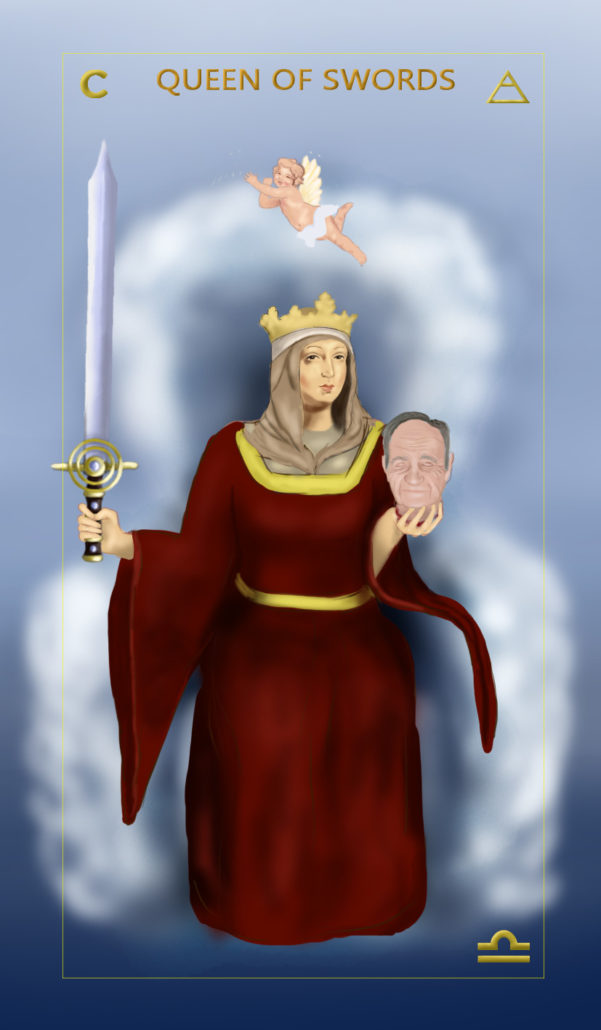 QUEEN OF THE THRONES OF AIR

WATER OF THE THRONES OF AIR

The Queen of Swords represents the Water in the Air, thus supplying the qualities of emotion and sensitivity to the airy element. By extension, this Queen also endows the ability to transfer and reflect, to form and create. As the mother of Air, she is dominant when it comes to matters of intellect and logic.

The Queen of Swords can be very sensitive, perceptive, sharp-witted and intelligent. Being water in air, the Queen of Swords lacks the stability of the Earth as well as the will of Fire. Therefore, she can lack practicality and stability, running the risk of living in her own ‘reality.’

Furthermore, being water of air, she is like a cloud that can either produce a crop-saving shower, or a torrential downpour killing everyone in its wake.

The Queen of Swords is very logical and intelligent. All this has the advantage of gaining clarity in situations and being able to work through things intellectually to a high standard. She is very analytical, with a razor-sharp ability to get to the heart of the matter.

The Queen of Swords has enormous clarity &  has the the intellectual ability to judge and discern impartially, without the influence of strong emotions or sentimentality.

Unlike the Queen of Cups  she connects to other people through an intellectual, rather than an emotional understanding.  Above her, the sky is clear, indicating clarity of mind and vision.

On the dark side, the Queen of Swords can turn cruel, malicious and narrow-minded. She can become bigoted or even deceitful, and, downright, dangerous.

The Queen of Swords is Isabella I of Castile (Queen of Spain).  Hers is the double-edged sword: on the one hand, she sponsored knowledge and exploration (funding the voyage of Columbus to the new world).  With the other side of the sword, she ruthlessly exterminates and expels Jews and Muslims from Spain.

The Queen sits on the throne of clouds. In her left hand she holds a severed head of an old man. Above her is a cherub. In the card we have the principal of the old – severed head and the young – cherub.

In the Queen’s right hand is a Sword pointing up, showing her ability to analyze and cut through old ways of thinking, and acting,  so that we can live in the moment.