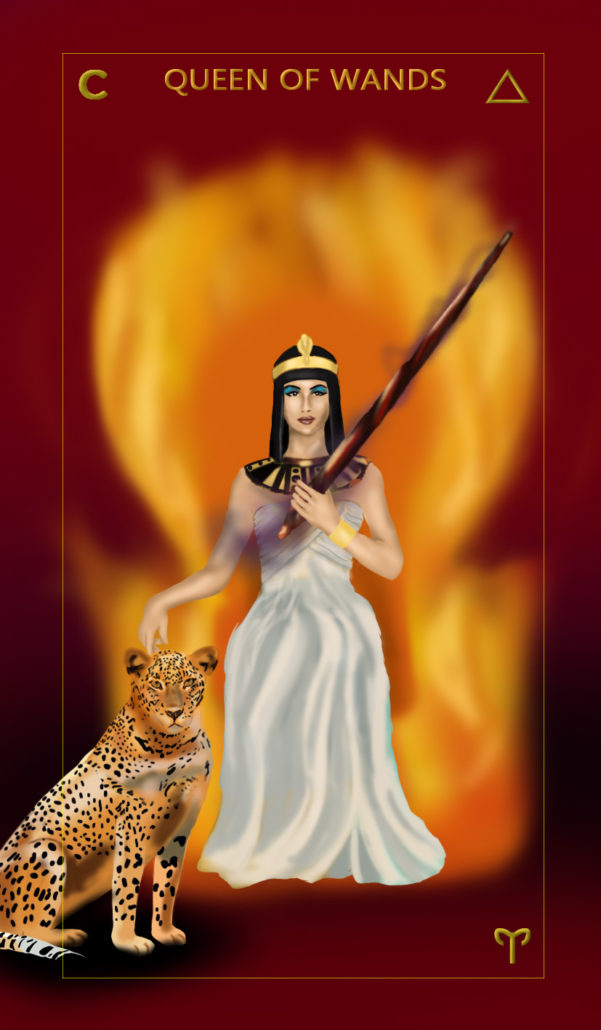 QUEEN OF THE THRONE OF THE FLAMES

The Queens are related to the third Sephirah of BINAH on the Tree of Life.  Whereas the Kings act under the influence of Chockmah, Wisdom, the Queens have the capacity to internalize and self-reflect more. This requires a quality of fortitude that the Kings do not possess.

Personifying the waters in the element of Fire, the Queen of Wands has a similar basic as the King of Cups, combining opposing elements when neither of the contrasts can overcome the other, thus having an unstable balance between them.

As a queen, The Queen of Wands is the mother of her element (and, by extension, all the cards of the suit that belong to it). She possesses emotion and sensitivity. This queen boasts of attributes of love, understanding and sympathy.  She has the ability to form and create, through trust and warmth. Her fiery character provides pride, passion, inspiration and powerful independence, whereas her charisma allows for strength and expansiveness.

Due to the imbalance in her character, the Queen of Wands can easily shift to her dark side. There, she becomes a hot-tempered, revengeful fury; over-dominant and possessive, taking the tiniest excuse as a reason to bear a grudge for years. She never forgets and never forgives, and as easily her fiery temper makes her forget her own mistakes, so deeply her watery depths can cause her to ponder long and broad about the mistakes of others.

Missing the stability of earth and the logic of air, tolerance and self-control never were the best qualities of The Queen of Wands.

The Queen of Wands is Cleopatra – the ultimate Femme Fatale. She is seated on a throne of fire, representing her passion, ambition and energy to get things done and assert herself. Sometimes, these qualities translate to imposing her will on others. At her feet is a leopard, the extreme ferocity of the element of Fire tamed by the Queen.  Her hand is on the leopard’s head, showing the power under her control. In the other hand, she holds a wand, showing that she is able to direct this force. (Wand is a symbol of Will).