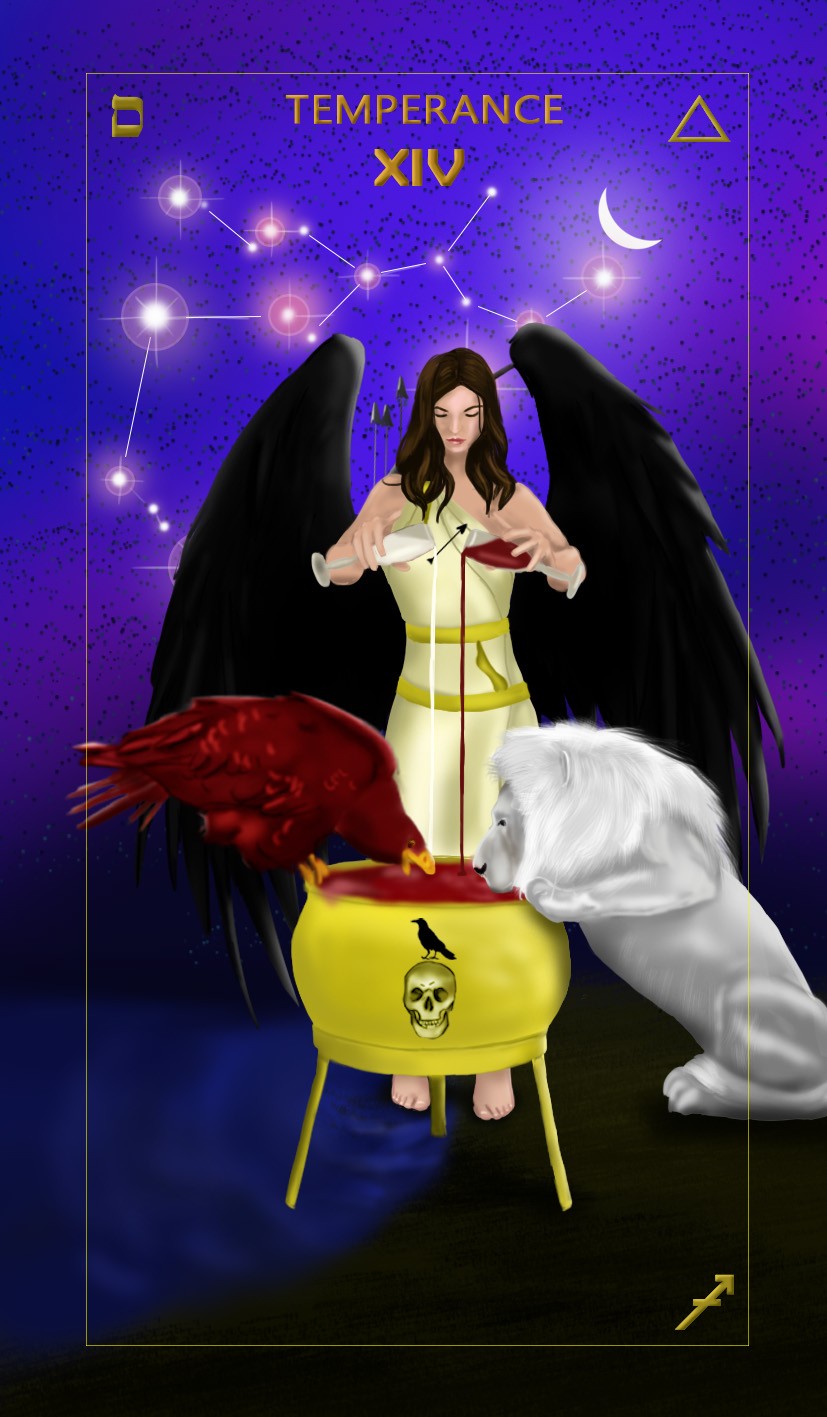 I didn’t care much for the TEMPERANCE trump before. It seemed to me it lacked some of the monumental meanings of the other Trumps: DEATH, THE TOWER, Judgement.  I mean, DEATH is horrid and final.  Judgment is the moment of reckoning.  But TEMPERANCE?

And then I picked up the Kabbalah. For me, TEMPERANCE, not only became monumental, but, perhaps, THE most monumental trump in the deck.

LIGHT AT THE END OF THE TUNNEL

Let’s start by examining its path on the Tree of Life.  It takes us from Yesod (Foundation) to Tipheret (Beauty).  In other words, it raises us from the lower world of our projection of the material state, into the our Higher Selves.  And it does that through the pillar of Equilibrium, which sits between the two pillars of Mercy and Severity.

It is arguably the most important and difficult path.  It has been called a path which eventually leads us to the ‘Dark Night of The Soul’ – a path on which we enter a dark tunnel, in the hopes that Light will appear at the end.  I will do some hairsplitting here by saying that this path is not an experience in itself – but rather the method by which an experience can be attained.  Namely, through an exchange and balance of opposites. The process is that of bringing Spirit into the body, so that it tempers the Ego.  Spirit, in turn, will then be tempered by the Ego, thus forming something new.  It is a personal application of Yod (Fire, Wands) and Heh (Water, Cups), uniting in a person to produce Vav (Air, Swords), within a body, which is Heh final (Earth).

The Kabbalah (and Aristotle) teaches that there is no such thing as a total good or a total evil.  After all, if the pendulum of good swings all the way – it lands in evil – and vice versa.  Look at it this way: a well-intentioned individual who does so much good for others that he exhausts himself and is no longer able to function – can no longer do good for others. Is that, then, still good?

And so TEMPERANCE teaches us that only when we combine both qualities in ourselves – constrain all to the middle pillar, will we reach Spirit.

In the TEMPERANCE card, we see the same angel as made a previous appearance in DEATH. The trump is ruled by the sign of Sagittarius, which is represented here as the Huntress Goddess, Diana, who governs the tides of earth and fluctuations of the Astral Current.  She is also the goddess of the Moon.  As Sagittarius, she is wearing bow and arrow across her body.  A small arrow points at her heart.  It means her body is feminine, but her mind is masculine (remember, equilibrium and balance rules TEMPERANCE).

One of her feet is touching the Earth (material world, Malkut), while the other foot is in the water (the subconscious, Higher Self, Tipheret)

The Angel is mixing fire and water, which become one as the fall into the cauldron – fiery water. Anther reference to the DEATH card is the skull on the front of the cauldron. In front of the cauldron are a white lion and red eagle.  They changed colors because the lion drank water and the eagle drank blood. The two animals represent the very idea of mixing the elements, yet, at the same time restricting (tempering) their properties.

To sum up TEMPERANCE: everything in moderation.

In a Tarot Reading, TEMPERANCE can represent one or more of the following: