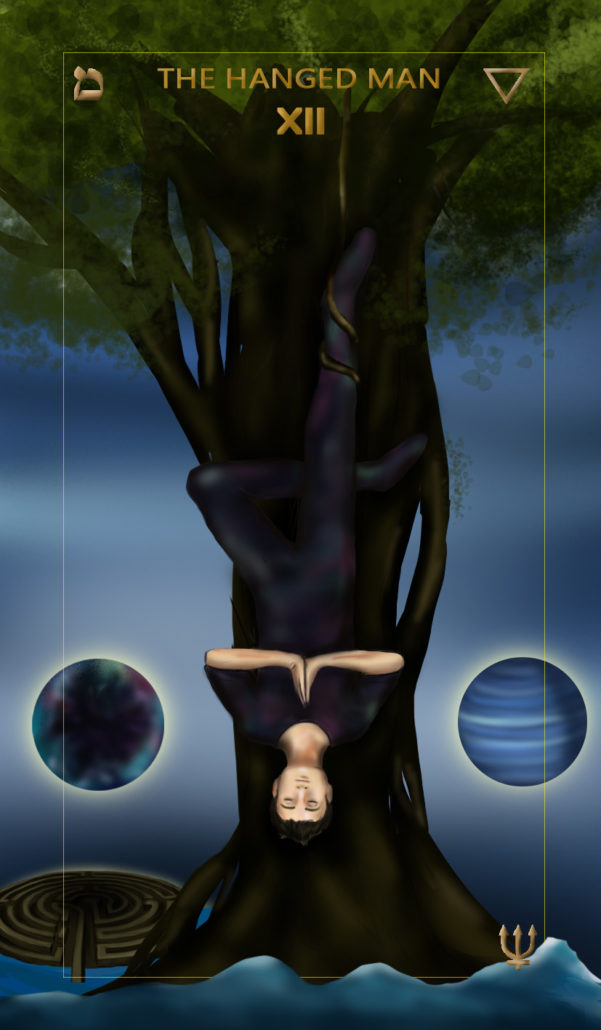 The Hanged Man is probably one of the most (if not THE most) misunderstood characters of the Major Arcana. He is a walking (or hanging) contradiction.  On the one hand he is hanged.  That’s bad. On the other hand, he looks happy in most Tarot decks.  That’s good. To add to confusion, the card meaning is often listed as “Sacrifice” – that’s bad, right, unless it’s good?

So, who is the Hanged Man and why don’t we get him?

So, to begin with, let’s identify his place in the Major Arcana.  The Hanged Man’s place is smack in the middle of the deck at number twelve. That gives us an important hint about the Hanged Man’s identity.  He is at the half-point of the Fool’s Spiritual Journey.  The half at which the cardinal lessons of Father-Mother-Teacher-Right-Wrong are behind him.  Looming ahead is the spiritual climb.

The Hanged Man is the Fool himself at the half-point of his Journey.

BRING IN ASTROLOGY AND KABBALAH

Further clues into the Hanged Man are provided by Astrological and Kabbalistic Associations. On the Kabbalistic Tree of Life, the path of the Hanged Man is identified by the letter Mem – water. Water is all about meditation and contemplation.

Astrologically, the Hanged Man is ruled by the planet Neptune – water. Neptune was the God of the Seas and on the zodiac chart, he rules the sign of Pisces, which is associated with the twelfth house – the house of secrets.

Furthermore, the path of the Hanged Man on the Tree of life is from the Sephirah Hod (Splendor) to Sephirah Gevurah (Strength).  Hod is the intellect of man. It is very deceptive, as we are often deceived that we are mere victims to circumstances in our world.  The tendency in that case is to give up spirituality for the day-to-day mundane existence.

Hence, The Hanged Man’s bent leg faces West for unconscious action.  And thus, his lower mind becomes transformed into a higher consciousness and understanding as he moves up to Gevurah.  Gevurah is the Sephirah of Strength, ruled by Mars, that is connected to man’s energy, which is finite.  By destroying old misconceptions and notions, Gevurah demonstrates that as humans, we have limitations that need to be destroyed in order for new (and true) reality to be formed.  It is Gevurah that destroys all that’s holding us back emotionally and spiritually.

So, the Hanged man is not hanged by force, but by choice. He is the Fool at the point of his journey where, after having learned the ‘basics’ – he now needs to walk away from the perceived truths and contemplate an alternate reality.  That’s why he is hanging upside down – to reflect on a different perception – a different reality.

Suspended upside down, the Fool in the Hanged Man can perceive a different view. He is peering into the true reality – the Spirit World.

Thus, in a Tarot Reading, the Hanged Man can represent any of the following: