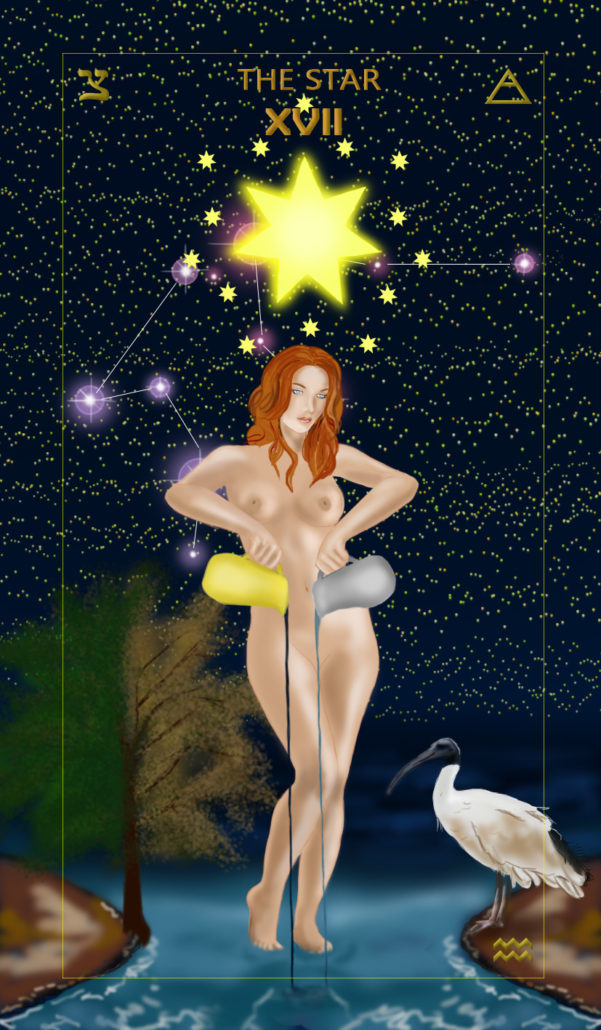 THE RIVER OF CONSCIOUSNESS

The Star is pouring water from two vessels: one of gold, one of silver.  The Golden cup is the cup of Chokmah (Sun) – father energy and the Silver Cup is that of Binah (Moon) – mother energy.  Thus, as the contents is poured -it forms a river at the Star’s feet. Therefore, The Star is merging the two streams of individual consciousness with the greater mindfulness.

The Star is the very epitome of the Great Mother – but at the level of our personality.  She is not covered – she is totally nude.  For in nature, human form is perfection itself.  The Star is also the same figure as the other Mother:  The Empress .

The Path of The Star on the Tree of Life is that of Tzaddi – connecting Netzach (Victory) with Yesod (Foundation).  It is a very powerful path. It reminds us that we too, carry Divine perfection in us.  It shows us the approach to Divine Energy itself.

On top of The Star is a 7- pointed star shining brightly. That’s because the entire universe is LOVE.  The number 7 is associated with Venus as the seventh Sephirah Netzach is ruled by this planet.

Around the main 7-pointed star are 14 other stars (all add up to 21 = number of Ehieh, God name of Keter), thus telling us that the relationship of this Path to the Godhead is far more direct than is obvious on the surface.

Finally, next to The Star is the bird Ibis – representing Thoth – god of Wisdom.  It is also a reference to the Magician and the will. It points out that wisdom emerges from a right understanding and control of the daily aspects of our lives.

The Star is against a dark blue sky with the constellation of Aquarius in the background. Aquarius is a very watery sign – water being the very symbol of the Unconscious.  Aquarius is all about the individual and uniqueness and yet has an overall humanitarian outlook. The Star shares these qualities in that it is trying to remind us about the divinity and uniqueness within us and yet encouraging us to be a conduit for bringing down our highest potential.

TRANSITION FROM THE TOWER

There is a reason the Star follows the Tower.  It is here to bring us hope after a crash. It is also a wishing star, reminding you to dream and find inspiration in your dreams.  The Star is also a reminder that in order to achieve those dreams, you need to let go of the past and the bitterness and hatred it may carry. Furthermore, you will need to first learn to practice forgiveness on yourself, before starting to apply it to others.

This transition from The Tower to The Star is about moving from the trauma of grappling with and trying to hang on to our present thoughts, attitudes and identity in The Tower to letting them flow and just be there with acceptance and without struggle in The Star.

In a Tarot Reading, The Star may mean: