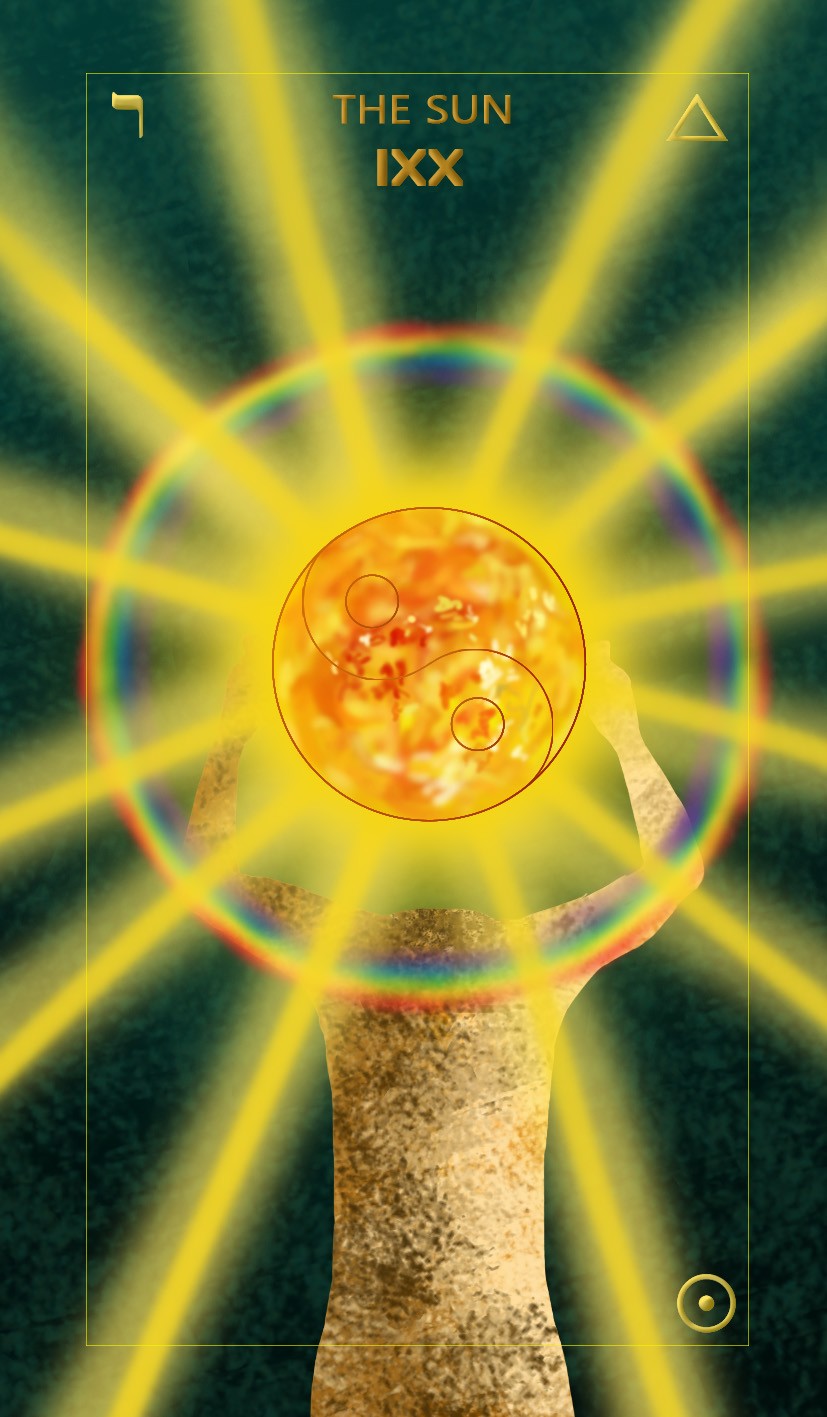 What is the Sun if not the very epitome of the Ego? Unlike THE STAR, which, on the path from Yesod (Foundation) to Netzach (Victory) leads the Personality into the Intuition, THE SUN, leads us into Hod (Splendor) – the Intellect.  The Intellect being the formative and controlling side of our Personality.  THE SUN is the very vehicle that connects our human intellect with the Higher Intellectual Form (in Hod).

That THE SUN controls all our components is brought home by the twelve rays emanating from it. They, as the embodiment of the twelve signs of the Zodiac, regulate our every action and decision, emanating from our birth and the signs aligned with it.

Yet the path of the sun is not materialistic.  On the contrary, it is a very profound path which introduces the light of our Personality (the light of the material world), to the inner sun – THE SUN of the Higher Self.  Just like with the actual star, while THE SUN radiates warmth and light.  Yet its rays are not without damage (can we say melanoma or blindness?) Thus, the same sun that gives heat and comfort and cause destruction and anguish. And so it is with the Ego – reveling in it will only keep us from true reality and confine us, forever, to the bondage of materialistic world of perception.

Additionally, the Hebrew Letter Resh, associated with this trump, means head, which is consistent with the human intellect.  But this individual (limited) intellect, cannot truly function to its fullest until it is taken to the higher Sephirah of Hod – the Higher Intelligence.

The Path from Yesod to Hod is a route on which many discoveries are made: namely the realization of limitations of this human intellect. It is a path where are inner teachers begin to influence our exoteric world. Look at it as a part of development of Human Personality where we realize we need to look backwards, to birth, to understand the source from which we emerged.

Also, on this path, we blend the Feminine of side our personality (as the path originates in Yesod, governed by the Moon) with the masculine – the SUN. For we begin to understand that we need both to make us whole (think TEMPERANCE). Like in THE LOVERS, the Sun combines our Yin and Yang – our masculine and female principles to make our SELVES complete.

The Image of this card is taken directly from an alchemical manuscript of 1606 C.E. In it, the figure IS the world, which must be headless, since its spiritual and rational parts are not material, and are, therefore, invisible.

The Head (Resh) of the figure is the same orb we have seen in THE LOVERS.  It a fusion of Yin and Yang; representation of the Personality, which, like the Higher Self and the Spiritual Self is composed of the ‘masculine’ (intuitive-dynamic Yod) and ‘feminine’ (intellectual-formative, Heh). It is also a reference to the Gemini, the sign referred by the Greeks and Romans to Apollo and the Sun.

Around the Sun is the rainbow – hinting at the presence of water. Water, of course, is connected to rising of the consciousness.

In a Tarot Reading, THE SUN can represent one or more of the following: