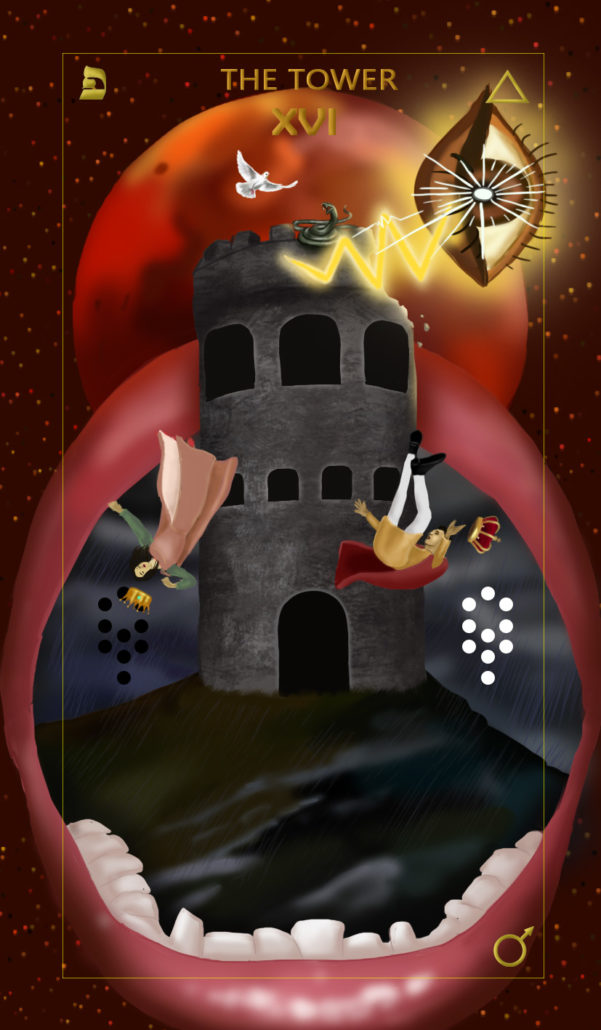 THE EYE OF SHIVA

In the most simple of terms, the Tower symbolizes the sudden destruction of our perception of what constitutes reality. It is, therefore, the destruction of the ultimate ego – the ‘I.’ In this card, our awareness of our Personality is being forcibly shattered to reveal the nature of our true Self – The Higher Self.

THE PATH OF PEH

According to the Kabbalah, it is on this, 27thpath, that we encounter Archangels in anthropomorphic guise.  To encounter the Archangels as formless consciousness means to destroy another tower which we have created. After all, the winged figures we’ve grown up imagining are mere attempts of our minds to give form to that which is formless.

One key symbol of The Tower is its very isolation.  Unfortunately, most of us perceive ourselves as lonely towers – separated from the rest of the universe by physical and intellectual pursuits.  The Tower shatters that perception to reveal our true source.  It is not an easy realization – and often has to come through force and element of surprise – represented her by lightning flash.

Astrologically, The Tower is ruled by the planet Mars, which corresponds with destructive energy of Gevurah – the 5th Sephira on the Tree of Life. Thus, the Tower points out that the inner growth is often a painful and overwhelming process.

THE TREES OF GOOD AND EVIL

To the sides of the Tower we see two representations of the Tree of Life. On the right is white on the left is black.  White represents the Tree of Life.  Black represents the Qlippot.  Therefore, as The Tower is struck down, the opposites of ‘good’ and ‘evil’ are suddenly viewed differently.  One begins to understand that all that IS in the Universe is part of the One Creator. Thus, every created thing contains the seeds of its opposite.

In a Tarot Reading, The Tower may mean: