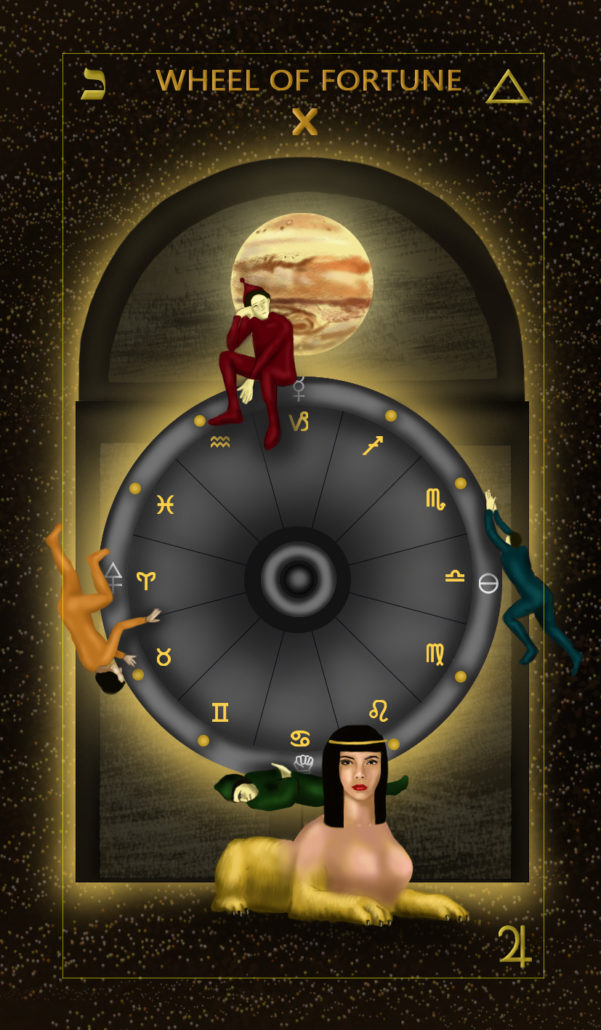 The Wheel of Fortune, numbered 10 in the Major Arcana, is probably the most understated card in the deck. After all, a wheel is a wheel, right? It has become such a mundane part of our existence. Bicycles, cars, gambling tables – we see wheels on everywhere we look on daily basis.  And yet, it is a truly mystical and powerful part of the Major Arcana, that requires a deeper understanding in order to truly understand its place and significance in any Tarot Reading. learn tarot card meanings

In any Tarot reading, the first thing the Wheel conjures up is an old King Solomon parable. In it, the wise king asked his servants to go on search of something that will make him smile when he is sad and make him cry when he is happy.  After a long search, an old servant finally presented King Solomon with just what he was looking for: a ring engraved with the following: “This too shall pass.” learn tarot card meanings

Thus, the wheel reminds us that no matter how high we climb, eventually we will fall.  No matter how low we fell, we will rise again.

IT’S ALL ABOUT KARMA

The Wheel of Fortune is the wheel of karma.  But it is NOT a wheel of chance or accidents.  There are no accidents in the Universe, which is one of the key lessons of this card.

When we examine the astrological connection, the Wheel of Fortune is ruled by Jupiter, the largest planet, symbolizing growth, expansion, luck and enthusiasm.  Even Jupiter’s glyph looks like the lucky number 21, as well as the number four, which sounds like ‘fortune.’ The Planet especially symbolizes growth on a philosophical level (as you will see in its Kabbalistic connection). It represents the process of expanding your world view through travel to distant places, friendships with foreign people and higher education.

In many decks, the Wheel has 12 spokes – representing the twelve signs of the Zodiac.  As you spin the wheel (counter-clockwise, by the way – according to the Zodiac), the signs will come and go, the seasons will make their brief appearance and flee.  And so it is with life. learn tarot card meanings

When we examine the Kabbalistic meaning of the Wheel, we need to dive even deeper. Most Tarot decks will contain the three alchemical symbols embedded in the Whee: Mercry, Sulhur and Salt. Mercury is attributed to the Sephira Keter, Salt is Chokmah and Sulphir is Binah.  These are the “Three Principles of Nature” and are related to the three Maternal Sephirot that make up Superconsciousness.  Perhaps the best explanation of this state becomes clear when we look at the figure of the Sphinx, often present in the Wheel card.

In Ancient Egypt, the Sphinx was originally a portrait of a pharaoh. It symbolized his great power (the lion’s body) over adversaries.  Eventually, the Greeks, who adapted the Sphinx image, transformed the face to become female, while still resting on a male body.  Thus the Sphinx came to represent not only man with the raw power of the animal kingdom, but also a balance of male and female in the same form.

Probably the most important role of the Sphinx is played out in the myth of Oedipus on the road to Thebes. Oedipus is blocked entry by a Sphinx who asks each traveler to decipher a riddle: “What walks on four legs in the morning, two legs at noon, and three legs in the evening?” All who failed to answer the question were destroyed. Only Oedipus answers correctly: it is man, himself, who crawls in childhood, walks on two legs in adulthood and uses a cane in old age. The result Oedipus’ correct answer has the Sphinx throw himself into the sea (an action satiated with meaning for the students of the Kabbalah).

The Sphinx is thus, a cardinal symbol of manifestation.  It is both that through which one passes in birth or death, and that which controls the passage. It is the Keeper of the Gate, proclaims eternal truth: “Man know thyself!” If one does, he is able to pass through the gate of consciousness. When the Sphinx throws himself into the sea, he is absorbed back into the Great Sea of consciousness. The gate is now open – as it is no longer needed.  To be more accurate, it is absorbed back into the Individual Higher consciousness which created it.

On the other hand, the Sphinx destroys those who are not ready to pass beyond the restrictions of time and space. It is an act of protection of the Personality by the Higher Self, which may also be considered the real death process.  Those who know the nature of the Sphinx may pass consciously from one state to the next, while others fall into a deep sleep, a ‘destruction’ of awareness, from which the soul gradually awakes into a new state.

SO WHAT DOES THAT MEAN?

While all these explanations of the Wheel of Fortune card may seem disparate, they all command the same thing: Man know thyself!  It is that lesson which the Wheel teaches us. It becomes extremely important as we consider karma, passing of seasons and our personal ups and downs.

Therefore, in a Tarot Reading, The Wheel of Fortune may mean: