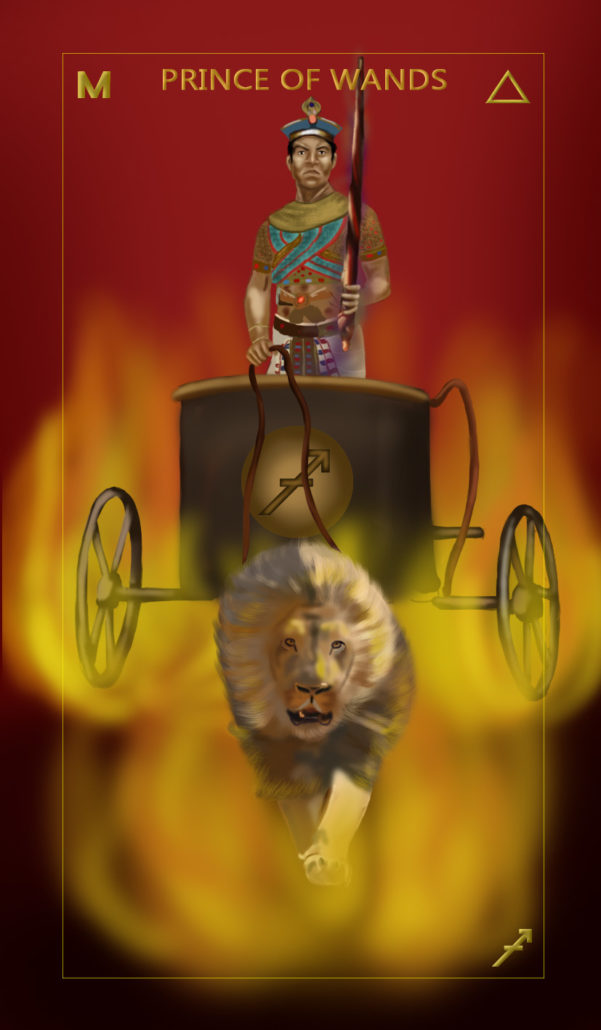 PRINCE OF THE CHARIOT OF FIRE

The Prince of Wands represents the Air in the element of Fire.  He is the  intellect and storm within the spiritual flaming. As the son of the Queen, he bears a certain heritage of the waters inside of him, expressing in romantical beliefs and a most generous nature.

Though, the attributes of fire are extremely dominant in this Prince, when combined with his inherent airy nature, the first impression of this Prince is that of a hot storm (sand-storm, if you will). He is full of action and while most of his actions are certainly willful, his energy can be somewhat impulsive.

Lacking the patience of the earth to ground him, the Prince of Wands wants it all and he wants it now. Any refusal or delay might provoke explosive outbursts from him. This Prince has endless valor and tenacity.  He will take on forces superior to himself and come out a winner.

ON THE DOWN SIDE

With all his air mixed in a whirlwind with Fire, Prince of Wands can be a trickster. He can become malevolent while recklessly abusing the powers of his mind to fool and ridicule those that are not as sharp as him. In his rush to charge ahead, he often cuts through like a hurricane leaving a huge wake behind himself.

Thus, when this Prince is ill-dignified, reckless destruction ensues, for he can be cruel and even sadistic. His impatience can mount into instability, as he is in constant search of new heights, burning his power for naught.

The Prince in this card is Thutmose III.  Officially, he became pharaoh at the age of two.  However, the first twenty two years of his reign were alongside his stepmother/aunt Hatshepsut.  After the death of Hatshepsut,  as Thutmose became the sole ruling pharaoh of the kingdom, he created the largest empire Egypt had ever seen (and did his best to destroy every legacy of Hatshepsut he could get his hands on).  He is the very embodiment of the both: light and dark sides of the Knight of Wands.

The knight is in a chariot being drawn by a Lion (symbolizing enormous strength that can be turned in either direction and which has the potential for violence, if angered).  The Chariot is leaping out from the flames.  On the front of it is the sign of Sagitarius (also symbolizing swiftness, and sometimes premature action). In one hand, he holds the reigns of the chariot – in the other hand is a wand.