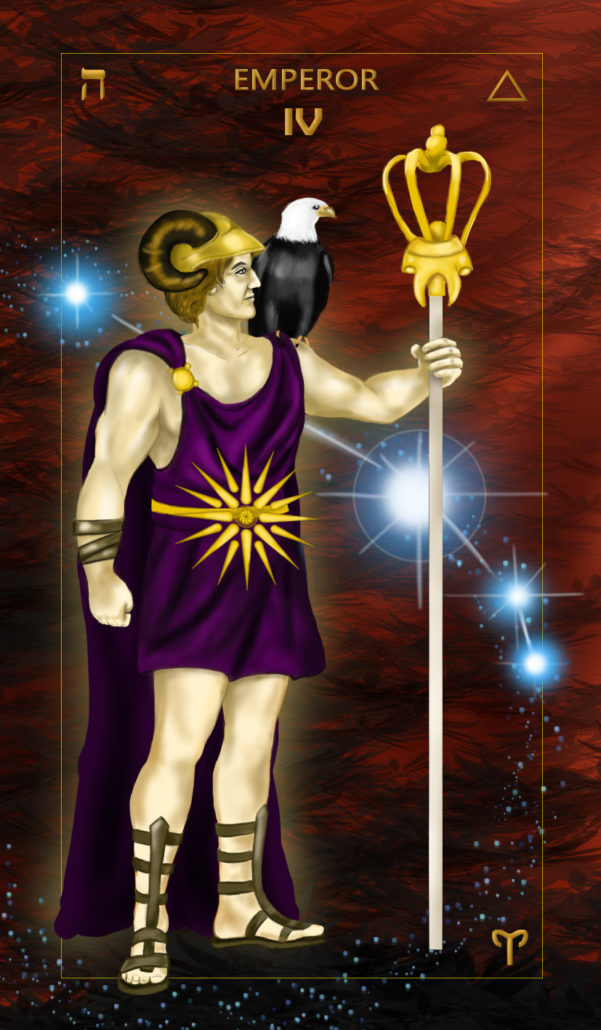 The Emperor is the very archetype of what Carl Jung called ‘the animus.’  He is the perfecty developed male type on the Paths of the Tree of Life (opposite the archetype of the ‘anima’, which is the Empress).

He is precise and firm, applying a mathematically measured reason to all things.  However, he does not wield a sword, nor is he in battle.

The Emperor, more often than not, is only shown in profile.  It is because it is impossible for one to know the totality of the Emperor while in this earthly existence.

In this card, is the embodiment of the greatest emperor in world’s history: Alexander the Great. Alexander, even having conquered many lands and peoples was a lenient and humane ruler (relatively speaking, of course, based on the standards of his time). He wears the horns of Zeus Ammon and holds a royal Scepter.  The Scepter represents authority, judgement and most importantly: respect. Next to The Emperor is the golden Eagle of Zeus.  Not only did Alexander the Great associate with Zeus Ammon, the Ram is also the symbol of Aries, the ruling sign of the Emperor card.

The eagle shows The Emperor as powerful and royal. Also, because eagles are often seen in sunlight, they symbolize being pure and courageous.  Eagles are also known for the excellent vision, reflecting the notion that the Emperor sees it all.

So how fitting is it that Alexander’s symbol was the Virginia sun.  This sun had sixteen points.  Four of which, represented the elements (Fire, Air, Water & Earth) – and, by extension the four suits of the Tarot. The other twelve were attributed to the twelve signs of the Zodiac.

The Number four is prominently featured as the number of foundation and stability. It is the first number of the Tarot that gives solid steadiness to shapes – shapes can now stand on their own – just like the emperor giving laws.

The Emperor represents the abstract principles of creation and universal laws.  He is the very representation of aggressive male sexuality – drive to conquer and domineer.

The Emperor is the equivalent of leadership responsibility , self-control, discipline and focus. Once we have set out our spiritual path goals with the Magician and connected with the soul in the High Priestess, tasted the LOVE inside with The Empress, we must take responsibility for our life and actions in the Emperor stage.  There is nothing timid or subtle about the Emperor. And that is, precisely, the message he brings: we must stand for something, otherwise we live for nothing.

The transition from The Empress to The Emperor also involves fostering a discipline on our spiritual journal. There are potentially many distractions in the world and we learn self-discipline and focus on this path.

In a Tarot Reading, The Emperor may mean: