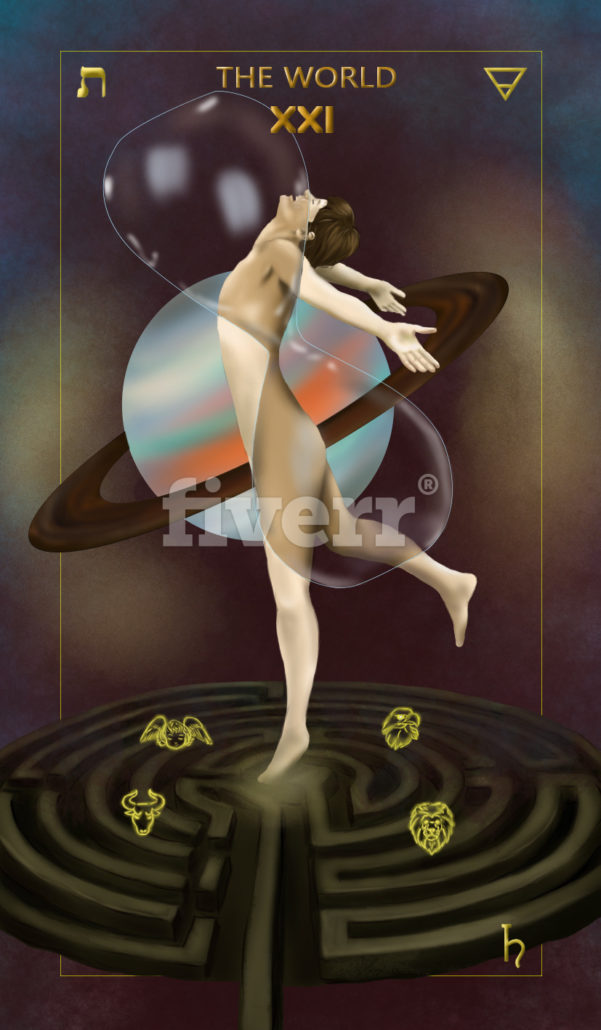 Kabbalisticaly, our journey through the Major Arcana begins not with the Fool (numbered 0), but with the World (numbered 21).  That’s because we, in the human form, exist in the lowest sephirah: Maklut.  It is the Sephira of the Material World .  It is here, in Malkut that our understanding is formed based on what we learn on earth.  In Malkut is where our esoteric work begins and ends. It is in Malkut that Divine Consciousness is functioning through a physical vehicle.

Therefore, we must climb up the Tree of life, out of the Kingdom (Malkut); and the first path out is the path of Tav – the path of the World.

THE END OF THE JOURNEY

The World card is the end of the Fool’s Spiritual Journey.  It is here that he finds enlightenment.  The Fool completed his journey and will now start the return back to the Spirit world. On this journey, however, he will carry back with him all the experiences and lessons of the just-lived life. He now has a clear face and body – a personality.  His experiences give him clarity.

The World may be considered the most important card in the deck.  It is from this point that we begin the process of inner exploration. This point is the one where we step abruptly into a reality that may be at once frightening and reassuring because so much of what we encounter on this Path is of our own making.  It is on this path that we find our own individual personality consciousness, all that is inside our heads, divorced from the security of physical reality. It is the path of initiation of the Personality into its own structure, which is a Microcosmic Universe.

THE PATH OF TAV

This path of Tav (The World Card) is astrologically associated with Saturn. Saturn, being the slowest of the planets, has dull, heavy qualities, such as structure and stagnation.  However, Saturn also rules Binah (the third Sephira, part of the Supernal Triangle). And so the very restriction that Saturn puts on us in the Malkut, also links us, through the path of Tav, to one of the highest points on the Tree of Life.  Saturn being the very symbol of time and limitation, reminds us that reasonable people understand their limits of time and space.

The World is the end of the Fool’s journey and also a beginning.  In the World Card, we have closed the circle by discovering that we are the source of ourselves.  We have achieved Enlightenment.

The Fool in the World Card is standing in the middle of the Labyrinth – the essence of his spiritual self. He has finally found it.

In a Tarot Reading, The World may mean: